You can play around with a Python script that I wrote that implements the backpropagation algorithm in this Github repo.

For an interactive visualization showing a neural network as it learns, check out my Neural Network visualization.

If you find this tutorial useful and want to continue learning about neural networks, machine learning, and deep learning, I highly recommend checking out Adrian Rosebrock’s new book, Deep Learning for Computer Vision with Python. I really enjoyed the book and will have a full review up soon.

For this tutorial, we’re going to use a neural network with two inputs, two hidden neurons, two output neurons. Additionally, the hidden and output neurons will include a bias. 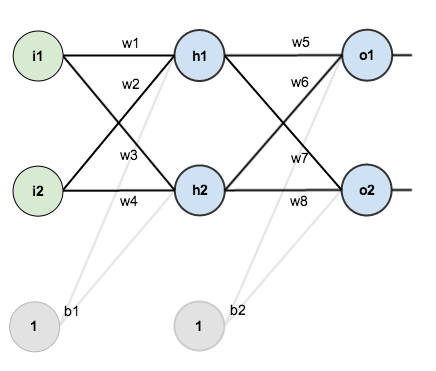 In order to have some numbers to work with, here are the initial weights, the biases, and training inputs/outputs: 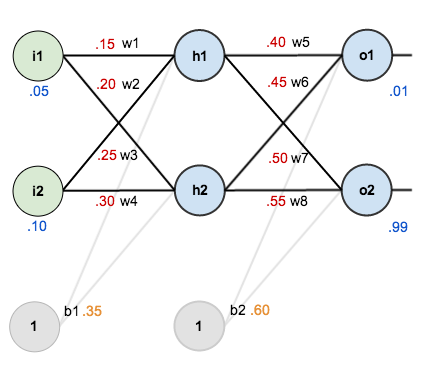 The goal of backpropagation is to optimize the weights so that the neural network can learn how to correctly map arbitrary inputs to outputs.

To begin, lets see what the neural network currently predicts given the weights and biases above and inputs of 0.05 and 0.10. To do this we’ll feed those inputs forward though the network.

Total net input is also referred to as just net input by some sources.

Here’s how we calculate the total net input for

Carrying out the same process for

Here’s the output for

And carrying out the same process for

We can now calculate the error for each output neuron using the squared error function and sum them to get the total error:

Some sources refer to the target as the ideal and the output as the actual.
The

is included so that exponent is cancelled when we differentiate later on. The result is eventually multiplied by a learning rate anyway so it doesn’t matter that we introduce a constant here [1].

For example, the target output for

Repeating this process for

The total error for the neural network is the sum of these errors:

Our goal with backpropagation is to update each of the weights in the network so that they cause the actual output to be closer the target output, thereby minimizing the error for each output neuron and the network as a whole.

. We want to know how much a change in

affects the total error, aka

is read as “the partial derivative of

“. You can also say “the gradient with respect to

By applying the chain rule we know that:

We need to figure out each piece in this equation.

First, how much does the total error change with respect to the output?

is sometimes expressed as

does not affect it which means we’re taking the derivative of a constant which is zero.

Next, how much does the output of

change with respect to its total net input?

The partial derivative of the logistic function is the output multiplied by 1 minus the output:

Finally, how much does the total net input of

change with respect to

Putting it all together:

You’ll often see this calculation combined in the form of the delta rule:

which can be written as

(the Greek letter delta) aka the node delta. We can use this to rewrite the calculation above:

so it would be written as:

To decrease the error, we then subtract this value from the current weight (optionally multiplied by some learning rate, eta, which we’ll set to 0.5):

(alpha) to represent the learning rate, others use

(eta), and others even use

We can repeat this process to get the new weights

We perform the actual updates in the neural network after we have the new weights leading into the hidden layer neurons (ie, we use the original weights, not the updated weights, when we continue the backpropagation algorithm below).

Next, we’ll continue the backwards pass by calculating new values for

Big picture, here’s what we need to figure out: 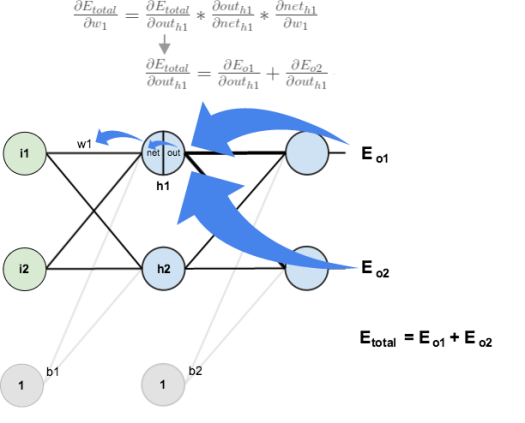 We’re going to use a similar process as we did for the output layer, but slightly different to account for the fact that the output of each hidden layer neuron contributes to the output (and therefore error) of multiple output neurons. We know that

needs to take into consideration its effect on the both output neurons:

Following the same process for

Now that we have

, we need to figure out

We calculate the partial derivative of the total net input to

the same as we did for the output neuron:

Putting it all together:

We can now update

If you’ve made it this far and found any errors in any of the above or can think of any ways to make it clearer for future readers, don’t hesitate to drop me a note. Thanks!

992 thoughts on “A Step by Step Backpropagation Example”