I recently received this email:

I was sitting here yesterday talking with a friend and remembering our own good ole days when Modal Tools by Tau got brought up. We talked about what a great program it was, but how impossible it is find anymore. i stumbled across your archive site and got a small thrill thinking that aol-files.com was actually in existance still/again. i quickly realized it was archived but had to keep reading for nostalgia.

I eventually came to a part that said “if you remember aol-files.com send me an email”. So, heres that email and a shout. And, a small request i hope you might be able to help with. While we may have stopped the childish games, Modal Tool 2.0 still has simple uses and we have been hoping we could find a copy. If you happen to still posess that, it would be great if you could email it to me or just link me to it somewhere. I would greatly appreciate it. And hey, thanks for giving us (once upon a time) aspiring aol hackers neat stuff to play with back in the day.

There was a certain type of window on AOL called a Modal or specifically, “_AOL_Modal”. They looked like this:

Whenever an AOL Modal popped up you had to act on it before you could do anything else with the AOL client. Most windows in the AOL class hierarchy fell under the “AOL Frame25” class, which was basically the entire AOL client. Modal’s were a different breed. They were a separate entity and they could not be moved, resized, or hidden. This is from a tutorial I wrote back in the day on AOL Class Names:

Over time people figured out that you could do some interesting things with some of the modal windows.

For example, AOL did not charge you for the time you spent creating a new screen name. They simply disabled the rest of the AOL features until you were out of the area designated for coming up with new names. For people who had unlimited usage billing plans, this didn’t really matter. But at the time (1998ish), a lot of people still paid per hour. Someone figured out that if you simply hid the AOL Modal that was open when you were creating a new screen name, AOL still through you were in the create screen name area but you could still use AOL like normal.

Clever, huh? I seem to recall that AOL sued the guy who popularized this method of avoiding charges, but that may have just been a rumor.

Modal Tool was a small program written in Visual Basic that made it easier for people to figure out how to do things like that. It let you explore the contents of AOL Modals (they often had hidden controls), disable them, hide them, etc. I think it was a fairly widespread tool within the AOL hacker community at the time.

Not sure if it works on newer versions of AOL (the last time I used it was around 2001), but you’re welcome to download it if you want to play around with it: Download Now.

PS – If you’re looking for a generic program that lets you explore the contents of any window (not just AOL Modals), I highly recommend Winspector.

The discussion on HackerNews is excellent too.

Yeah, I hated school too. It’s not ever going to change because it’s for the masses. That’s its sole and express purpose. Why is anyone trying to redesign the system or otherwise shoehorn exceptional people into a system designed for the masses? Either drop out or shut up, in my opinion. Massive social structures don’t have time for unique butterflies. That’s the Reality of the situation with a capital R.

The optimum solution is to just get it done at an 75-90% level until you graduate HS or college and get on with your god damn life instead of fighting it for years and years and years and pulling yourself and others down in the process. Just give them the bare minimum of what they want while pursuing your own interests. It’s politics 101.

This is why many, many successful people say “I dropped out”, or “Oh, I was only a B and C student” instead of “I spent every waking moment of my life trying to rebel against the system in which I had no place in, attempting to reforming it form the inside to suit my specific needs to a tee.”

Your first time is always special: 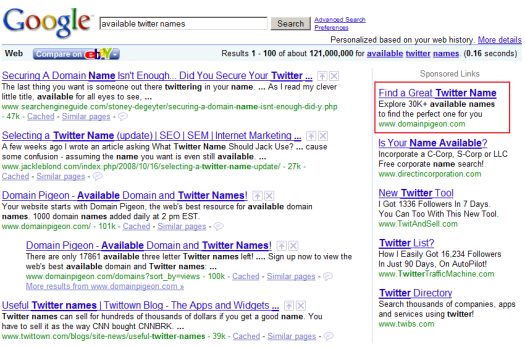 I set a monthly budget of $250 and entered about 15 phrases I’d like Domain Pigeon to pop up for.

I do realize that it’s currently the third result for this search term and that paying for advertising on this page is probably unnecessary, but what the hell, let’s see what happens.

On February 8 I wrote the following:

Before I start adding more features I’m going to add credit card processing to the site. The percentage of people that follow through to Paypal to complete their registration is abysmal.

Well, I was lazy and abandoned it in favor of adding some shiny new feature.

After the CNet traffic two weeks ago I decided to take another look at the conversion rates.

To make a long story short: only 10% of the people were completing their purchases. Ouch. I think Paypal is difficult to use for people without Paypal accounts and I think most of them didn’t complete their purchases. There could have been usability problems on my end too, but I think it’s minimal in comparison.

I said enough is enough, I’m not doing anything else until I get this done. So, I spent the last two weeks adding credit card processing to the site. Hallelujah.

I have to thank Ryan Bates from Railscasts for his excellent videos on Active Merchant.  Without his tutorials this would have taken much, much longer. 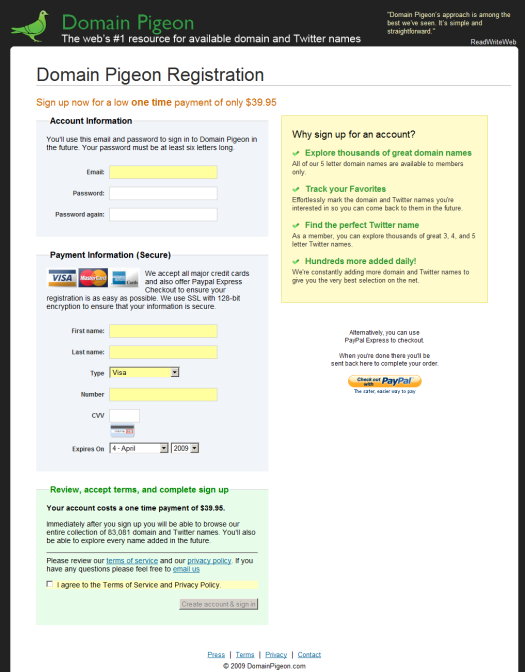 I’d also be remiss not to thank 37Signals, for it was the registration page for Backpack that was my inspriration for this design.

I’m thrilled that its done and that I can get back to adding new features.

P.S. This is a good read: The 5 Things I’d Tell My 21 Year Old Entrepreneurial Self.