It’s been a while since I’ve written on this blog, so wanted to take a break from my normal routine to say hi to you long-term readers and share a few updates about what’s going on in my world.

Work-wise, I’m very fortunate to not have been heavily impacted by Covid so far. I’m still consulting with Help Scout where I oversee their analytics and business intelligence efforts. I had been consulting with Automattic as well, but left earlier this year to focus more on growing Preceden, my long-running timeline maker tool. After a few months though I had knocked out most of my big todo list items for Preceden, so started looking for something new to work on and decided to I wanted to learn machine learning. My goal at the moment is to find some valuable ways to apply machine learning to help grow Preceden and Help Scout.

These days, my mornings are mostly spent getting better at machine learning through a combination of courses on DataCamp, books, and projects. Preceden is on the backburner, though I do spend some time each week working on support and fixing occasional bugs. My afternoons are spent with Help Scout where I spend a lot of time using dbt and Looker to help the team gain insights though data.

Family-wise, we moved from Florida to North Carolina last summer and we’ve been very happy with the move. My kids are 5, 4, and 2 now and keep my wife and I very busy.

Health-wise, I’ve been experimenting with high-intesnsity interval training (HIIT) workouts on YouTube which I enjoy beause they’re short but also get you sweating a lot. Most benefits I get from those are negated by a suboptimal diet though (Chick Fil A and Dunkin Donuts are so good…).

I recently finished Ozark on Netflix and highly recommend it, especially if you enjoyed shows like Breaking Bad or Narcos.

I also usually play one, sometimes two online poker tournaments with friends each week – if you’re interested in joining shoot me an email.

I’ll try not to let a year go between blog posts in the future, but no promises 😁.

Hope everything is going as well with you all.

This morning I was catching up with my friend and coworker Dave Martin and we got to talking about blogging and how we both miss casual blogging: things like writing about what we’ve working on, what issues we’re running into, what we’re learning etc.

The problem for me boils down to this really high bar I have set in my head for what’s worthy of a blog post. I like writing long technical posts and it’s difficult getting used to the idea that short nontechnical posts are just fine too.

So, in an effort to get back into blogging, here’s a quick update on what I’ve been up to:

I’ve been at Help Scout now for about 4½ months and am really enjoying it. My coworkers are awesome, I love the product, and I’m really getting to level up my data science and analytics skills which I plan to write more about in the future.

My only side project these days is my 7-year old timeline maker service, Preceden. Besides about an hour of customer support each week (via Help Scout, of course), it’s almost entirely passive, though I try to put a few hours into product development and marketing each month to keep improving it.

On the home front, my two year old son and one year old daughter are doing great. I feel incredibly lucky to work remotely which lets me spend more time with them and my wife each day.

I’ve been trying to focus more on my health lately, not because of any major issues, just in an effort to feel more energetic and less stressed each day. Things like sleeping and exercising more, avoiding coffee, meditating, not checking the news so often, etc. I’ve had mixed success maintaining these efforts long term though… it’s a work in progress :).

If we haven’t chatted in a while, I’d love to catch up. Drop me a note anytime by email at matthew.h.mazur@gmail.com or on Twitter/Telegram @mhmazur. Cheers! 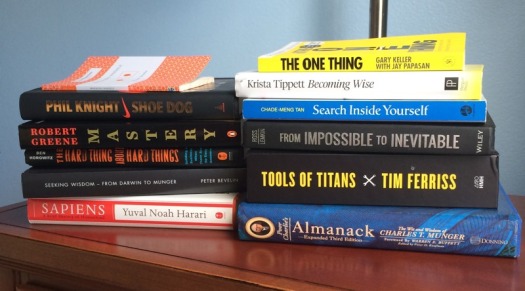 Over the last few years I’ve read maybe 2-3 books per year and a good chunk of those were audiobooks so I’m not sure they even qualify as reading. Part of that is that reading hasn’t been a priority for me: given a choice between working on side projects, spending time with my family, watching Game of Thrones and other shows, or reading, I normally don’t choose to read. Another part of it is that I’ve found it harder and harder to sit and read for more than a few minutes; years of Facebook and Twitter have taken their toll on my attention span.

That all changed recently when I made a few modifications to my reading habits. Many of these changes were inspired by discussions on Seeking Wisdom, a fantastic new podcast by David Cancel and Dave Gerhardt about a wide variety of topics including building great products, marketing, personal growth, work-life balance, and more.

Here are the key changes I made:

A lot of these seem obvious in retrospect, but it took a while for their importance to really click for me. I’d encourage anyone who wants to get back into reading to experiment and see what works for you.

If you have any other suggestions on how to read more effectively, don’t hesitate to drop me an email or leave a comment below.

Play a lot of poker and you’ll come to realize there are several different forms of good luck involved in both cards and in life:

1. Something positive happens due to chance

This what we tend to think of when we consider good luck: there’s a small chance of something positive happening and it does.

Poker: You get all in preflop with nines vs someone else’s kings, hit a nine on the river, and win the pot despite being a 4-1 dog when you got all in.

Life: You win the lottery for a few million dollars.

I’ve written about how if you expose yourself to small probabilities repeatedly, the odds of that thing happening rise dramatically. For example, a rock climber who estimates his odds of dying on a climb are 1 in 1,000 has a 63% chance of dying after 1,000 climbs.

Poker: You win a tournament after getting all in with AK vs Ax (like A9, etc) multiple times. You’re roughly a 3-1 favorite each time you get all in, but were lucky that your opponents never hit one of their outs and knocked you out.

Life: You’ve never been rear-ended while waiting at a traffic light.

3. A random situation favors a positive outcome for you

Poker: It’s late in the tournament and it folds around to the small blind who raises with kings. You look down and find aces in the big blind, re-raise, get it all in, and your aces hold up. You were lucky because had the small blind gotten aces and you gotten kings, you would have also wound up all in, with you likely losing. There was no skill involved in the outcome.

Life: You’re born in America and not a third world country.

4. You get to experience lucky situations at all

Poker: When you first started playing, you ran well, which encouraged you to play more, which led you to improving and playing long term.

Life: Bill Bryson says it best in a one of my favorite books, A Short History of Nearly Everything:

Not only have you been lucky enough to be attached since time immemorial to a favored evolutionary line, but you have also been extremely-make that miraculously-fortunate in your personal ancestry. Consider the fact that for 3.8 billion years, a period of time older than the Earth’s mountains and rivers and oceans, every one of your forebears on both sides has been attractive enough to find a mate, healthy enough to reproduce, and sufficiently blessed by fate and circumstances to live long enough to do so. Not one of your pertinent ancestors was squashed, devoured, drowned, starved, stranded, stuck fast, untimely wounded, or otherwise deflected from its life’s quest of delivering a tiny charge of genetic material to the right partner at the right moment in order to perpetuate the only possible sequence of hereditary combinations that could result-eventually, astoundingly, and all too briefly-in you.

I’ve found that knowing about these different forms of luck has made it easier for me to recognize and appreciate when chance is playing a role in a situation, good or bad, and not to overstate the role of my decisions in the outcomes.