It’s been a busy productive day. Most of my effort was focused on improving the homepage and the registration page.

Homepage After (with markups):

I also did a lot of work on the registration page, as it was not exactly something to be proud of. 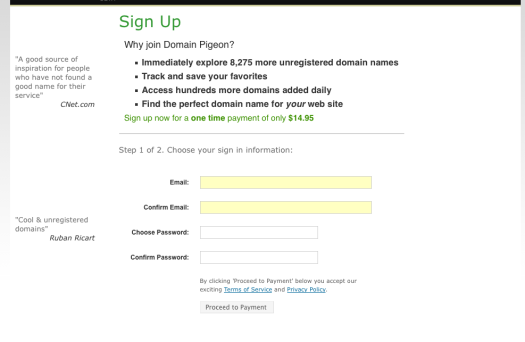 This is almost identical to how it looked on the launch day with the exception of the quotes and some minor wording changes which I did yesterday.

The major problem was that I was trying to fit everything within the center column without using either of the side columns. This forced me to use unnatural, awkward wording.

Expanding it so that I used the entire page allowed for a lot of extra flexibility.  WordPress’s registration page was my inspiration for the current look. Also, that little button is thanks to an excellent tutorial by Kevin Hale on how to take advantage of the neglected <button> element.

It’s impossible to say how these small changes would have ffected the registration rate the past few days, but I think its fair to say that it only could have helped.

As always, if you have any suggestions for Domain Pigeon please don’t hestitate to email me at matthew.h.mazur@gmail.com.

Hey there! I’m the founder of Preceden, a web-based timeline maker, and LearnGPT.com, a GPT education site.