Preceden, the project I am currently working on, is coming along well. I hope to launch before the end of January. 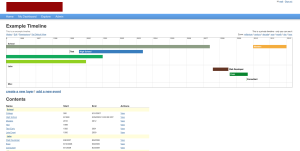 I intentionally haven’t spent much time on the layout yet; most of my work has been focused on the backend. One of the main lessons learned from Domain Pigeon was that substance is more important than design. I spent way too much time working on Domain Pigeon’s layout during development and it probably pushed its launch back a few weeks. With Preceden, I plan to launch a Minimum Viable Product early and iterate from there.

The large maroon box on the top left is a placeholder for Preceden’s logo. I currently have a logo proroject open with CrowdSpring. Here’s the idea: You describe what you want and dozens of designers submit proposals to you. At the end of 7 days, you pick which one you like the best. Whoever you pick gets whatever you originally offered ($200 in my case). I used CrowdSpring with Domain Pigeon and was very happy with it–you get a lot of good designs for a relatively cheap price.

I considered designing a simple logo myself, but I think the logo is too important to leave to an amateur. The is the first thing people see when they visit the site and a crappy logo will immediately signal a crappy site (I should A/B test this after the launch to see just how much of an affect it has on conversion rates).