In January 2010 I launched Preceden, a free web-based timeline tool. In May I migrated to a freemium plan, where users could add a certain number of events for free but had to upgrade to the pro plan in order to create more than that. After some experimentation with different limits and prices, I settled on 5 events for free and a one time payment of $30 to upgrade to the pro plan.

In June I started working on jMockups, a web-based high fidelity mockup tool. From June until the beginning of December I hardly touched Preceden. At the beginning of December I started reviewing Preceden’s stats and realized Hey, this is actually bringing in some decent money so I decided to start dedicating some time each week to working on it. (For a more detailed explanation of why I wasn’t watching it closely, read my 2010, 2011, and a $4K/month challenge post.)

Looking over the revenue figures I wondered: What would happen if I completely removed the free plan? Instead of a user being able to create 5 events for free, new users would have to pay first to use it.

After about three minutes of planning, I decided to go ahead and implement the change.

I wanted to change as little as possible so that the results of the experiment would be accurate. After all, you can’t change several variables at once and then attribute the changes to only one.

That being said, I made a few small changes to the site which may have affected the results.

3) I made some layout and copy changes on the homepage

4) I removed the reCAPTCHA form from the sign up page

I shouldn’t have made these changes, but at the time I was more focused on the potential increase in revenue than on running a proper experiment.

Before and After Screenshots

Notice at the top of the new sign up page it indicates what step of the process you are on (1. Create an Account, 2. Checkout, 3. Create Timelines). I also changed the copy on the button from “Create my Account” to “Create Account and Proceed to Checkout”. The wording will come into play later.

(Only present on the pay-first version) 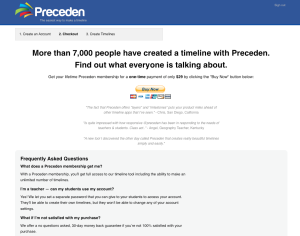 Users who were able to test Preceden before paying were 347% more likely to upgrade to a paid account than those who weren’t.

Also — and this is definitely my fault — 205 people filled out the sign up page and then abandoned the process on the Checkout page. Why? Most people probably didn’t realize they had to pay before using it. Sure, the Pricing page said “$29 for Unlimted Access” without mentioning a free account and Step #2 of the sign up process was called “Checkout”, but overall the copy didn’t clearly indicate that you had to pay before you could use the app.

Another problem is that the site doesn’t include a demo. It includes examples, but nothing the user can create on their own. Adding a demo section so that new users can get that “Oh cool” moment would have gone a long way.

The good news is that about 4% of the people who created an account converted to the paid plan when they were able to test the product first. Even if the pay-first experiment resulted in better figures, I feel more comfortable letting users test the product before paying. I think this depends a lot on your app and your business model, but for a tool like Preceden there’s no reason not to let people try it for free first. Accordingly, I’m switching back to the freemium version starting today.

Over the next few weeks I’m going to experiment with A/B testing and AdWords to see what’s possible. I’m also going to email the 205 people who signed up during this experiment but didn’t pay; I’m sure they’d be interested in trying it out.

Can you think of anything else that might improve the conversion rates? Leave a comment below and I may test it out.

If you enjoyed this post, you should subscribe to the RSS feed for this blog to get future updates. Also, if you’re a web designer or developer I’d love to get your thoughts on jMockups, my new web design startup. Drop me a note at matthew.h.mazur@gmail.com or @jmockups on Twitter. Thanks!

19 thoughts on “I Eliminated the Free Plan from my Web App for a Month: Here’s What Happened.”