My handy Elementary Statistics textbook, which I’m using to get smart on the math behind A/B testing, states the following:

, then the binomial random variable has a probability distribution that can be approximated by a normal distribution with the mean and standard deviation given as:

In easier to understand terms, take the following example:

The first formula lets us figure out the mean by simply multiplying the number of visitors by the probability of a successful conversion:

The second formula, the one to figure out the standard deviation, is less intuitive:

Why are we taking the square root of the product of these three values? The textbook doesn’t explain, noting that “the formal justification that allows us to use the normal distribution as an approximation to the binomial distribution results from more advanced mathematics”.

The R script below simulates 250 visitors coming to a website, each with a 30% chance of signing up. After each group of 250 visitors we track how many of them wound up converting. After all of the runs (the default is 1,000, though the higher the number the more accurate the distribution will be) we plot the probability distribution of the results in blue and a curve representing what we’d expect the distribution to look like if the standard deviation formula above is correct in red.

The distribution of results from this experiment paints a telling picture: 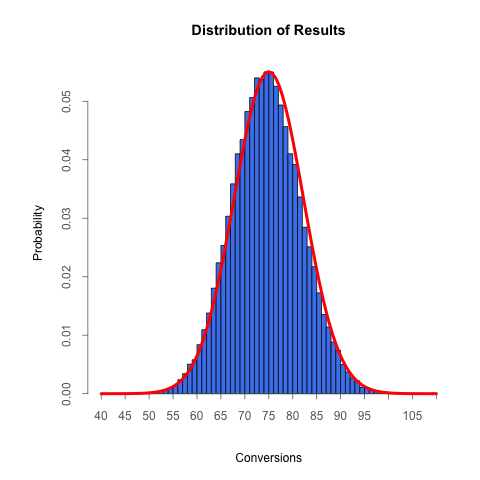